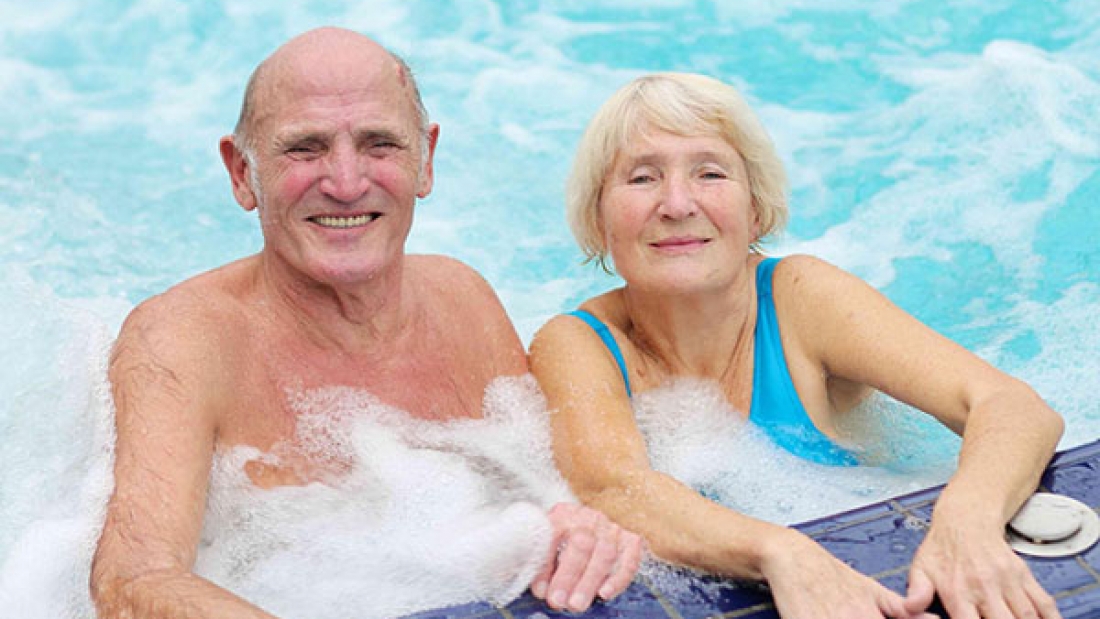 Clinical Review by Bruce E. Becker, MD, MS
Aquatic exercise has been successfully used to improve balance and coordination in older individuals, who face an increased risk of falling.
A 2008 study assessed different forms of aquatic exercise in a group of older subjects, finding that deep-water running had statistical advantage over typical chest-depth aquatic exercise in reducing balance sway distance and that both exercise forms improved reaction times and movement speed

[147]. The hypothesis was that an open chain exercise such as a deep-water program would add an additional balance challenge to the closed chain exercises typically done.

It may be concluded that both open and closed chain exercise in the aquatic environment can produce significant gains in balance, with some evidence that the former adds increased challenge.

Whether these gains lead to a reduction in falls remains an open question, although rehab programs are typically built around this hypothesis and a recent Cochrane review supports the belief [149]. Aquatic balance-building programs will typically use techniques such as Ai Chi, Yoga-lates (a hybrid aquatic yoga/Pilates program), and balance drills in waist-depth water.

Because aquatic exercise, whether through swimming or vertical water exercise is either limited or non–weight-bearing, the question has long existed as to its value in the development of significant bone mineral stores, and in the management of osteoporosis.

These are really two separate questions. In young men and women, bone mineral content develops as a function of growth in body mass and bone loading.

There has been extensive study of the effects of various types exercise on bone growth and mineral content in the early years of life in men and women, both pre- and post puberty [150-158].

The effect of exercise, both impact loading such as running and of non impact exercise such as cycling and swimming appears to clearly favor impact-loading exercise in both young men and women. This advantage appears to hold through early adulthood as measured in elite competitive athletes [151,159-165].

There does seem to be a slight difference between men and women during these later competitive years, with men building slightly more bone than women [150,151,159,165,166].

Even in later years, the athletes have greater bone mineral content than non athletic controls, which demonstrates the value of early-life athletic activity, especially for women who are at greater risk for osteoporosis.

The youthful swimmers in most of these studies seem to have higher bone mineral content than non exercising controls, but generally less than athletes practicing gymnastics, cheerleading, or similar activities.

The question of the role of aquatic exercise in later years, especially for women at risk for osteoporosis is more problematic.

Bravo et al studied a group of postmenopausal women for more than a year, with participants performing a specially created aquatic exercise routine emphasizing impact loading, such as jumping and landing in waist-depth water.

Although they found a great many positive changes in the study group, including improvements in functional fitness, specifically flexibility, agility, strength/endurance, cardio respiratory endurance, and gains in psychological well-being, they did not find an increase in either spine or femoral neck bone mineral density as measured through dual-energy X-ray absorptiometry (DEXA) scanning, although femoral neck mineral content did not decrease over the year [167].

A Turkish study did find gains in calcaneal bone density after a 6-month study of aquatic exercise in a group of 41 postmenopausal women, but did not study either the spine or femoral neck, both areas of major concern for osteoporotic fractures [168].

A Japanese study of postmenopausal women did find that active exercisers preserved better forearm bone mineral density than non exercisers, with high-impact activity preserving better than low impact such as swimming, but again did not study sites of particular concern for fractures [169].

Because of the safety of aquatic exercise, the risk of injury during the exercise period is extremely small, and a fall, should it occur, will generally only cause a person to get their hair wet.

Thus it is quite reasonable to begin an active exercise regimen in the pool, either through swimming or vertical exercise. When feasible, transition to a land-based exercise regimen that does involve more impact loading should follow as it remains likely that aquatic exercise alone will not provide a major osteogenic stimulus.